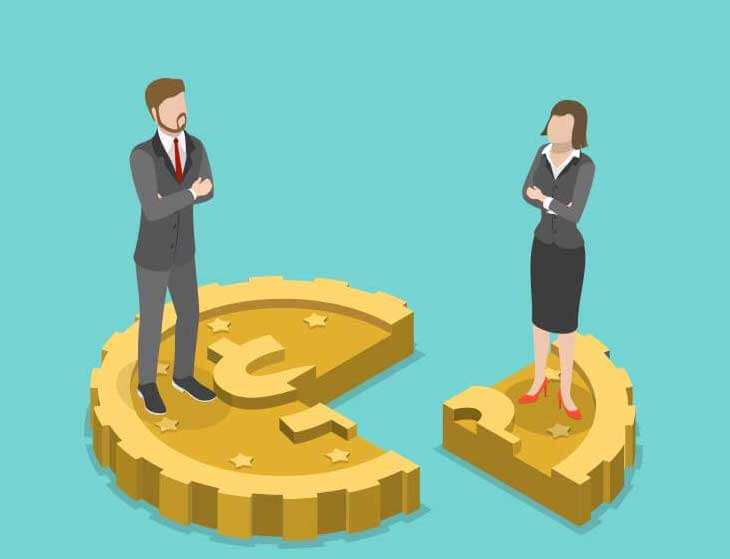 Women’s participation in the workforce has significantly increased since the second half of the 20th century, however, there is a considerable wage gap between men and women. Interestingly, it’s not just bound to developing countries and the gender pay gap is strikingly visible in developed countries including the United States, United Kingdom, Canada, and Australia among others.

Women work longer hours and pursue higher education in greater numbers, however, the pay gap between men and women persists in almost all industries. Discrimination and unequal household responsibilities followed by differences in the number of working hours and preference for part-time jobs are among the top factors contributing to the wage gap between men and women.

The gender wage gap doesn’t seem to be closing any time soon. Though the gender pay gap in the past few decades has been narrowing, the post-pandemic economic landscape has caused a relapse.

According to the World Economic Forum’s Global Gender Gap Report 2021, “another generation of women will have to wait for gender parity because closing the global gender gap has increased by a generation from 99.5 years to 135.6 years”.

So what exactly is the gender wage gap? What drives the unequal pay and the wage gap between men and women? And, the list of questions goes on, but this article will discuss the major headlines, i.e. factors causing the gender pay gap, how similar or different the gender wage gap is in the developed and developing economies.

What is the Gender Wage Gap & What Causes Pay Gap Between Men and Women?

What is the Gender Pay Gap?

The gender pay gap is an international measure of the difference between the average earnings of women and men in the workforce. The wage gap between men and women is the result of various social and economic factors.

The gender pay gap is a symptom of a broader cultural problem in workplaces and it reflects a systemic undervaluing of women’s contribution in the workplace.

What Causes the Pay Gap Between Men and Women

The gender pay gap gets often influenced by conscious and unconscious discrimination, segregation and stereotypes, and unequal social responsibilities. However, there can be a lot more causes for the pay gap between men and women in a certain economy.

Here are some stats that show a major and very clear wage gap between men and women in developed countries, and interestingly, the causes are almost the same.

According to Census Bureau data from 2018, the wage gap is larger for most women of color in the United States.

But this is not the only highlight; intentional and unintentional gender-based discrimination at the workplaces and stereotyping are none too different than anywhere else, and so the causes of the wage gap between men and women in the United States are almost the same as of other parts of the world.

The gender pay gap in Canada has not closed, despite the fact that women have outnumbered men in pursuing university degrees, i.e. 56% of higher-education students in Canada are women, but women with a bachelor’s degree earn an average of $69,063 annually, and men with the same degree earn about $97,761.30.

Women in Canada are pursuing highly demanding careers and the shift to management and leadership positions is visibly increasing, however, the number of highest-paid Canadian CEOs who are women is less than 5%.

More men in senior roles than women, unequal distribution of caring responsibilities followed by more women in part-time roles than full-time jobs, social norms forcing women to choose to work in low-paid roles and sectors, and gender-based wage discrimination are the widely identified causes of the wage gap between men and women in the United Kingdom too.

Women in Australia undergo almost similar situations, i.e. they remain underrepresented at every stage of the career pipeline in Australia, and the belief that senior-level roles are not easy to adapt to flexible work arrangements is the biggest reason for this underrepresentation of women in senior roles.

The causes of the gender wage gap are relatively common in all economies, however it is so deeply rooted in the cultural and social stereotypes that it has become very complex and each economy may require a comparatively different approach to address the gender wage gap.

Here are the common causes of the pay gap between men and women around the world.

Male-dominated industries such as construction, finance, engineering, manufacturing, etc. do not just offer the highest paying jobs, but also offer higher levels of discretionary payments, i.e. allowances, bonuses, commissions, and profit-sharing options. Female-dominated industries on the other hand have little or no access to these kinds of payments.

Gender-based wage discrimination at the workplace is a whole world inside a shell, and there are several cultural and social factors that contribute to this. For instance, assuming what jobs women are capable of doing and what they are not able to do.

Judging men as more competent than women is another common factor contributing to the wage gap between men and women. Some employers hesitate to hire a woman because they believe she will not fit into a ‘traditionally male’ workplace.

Intentional and unintentional discrimination is not limited to hiring only; in fact, it is available in promotion and performance evaluations as well, and as a result, women end up with lower pay, lower increments and the vicious circle goes on.

Causes of Stress in the Workplace

The popular argument is that women ‘ choosing’ to care for children is one of the main causes of the wage gap between men and women. So when they ‘choose’ to care for the family, they end up in part-time jobs, with fewer growth prospects.

Another popular belief is that part-time jobs ‘naturally’ do not have growth prospects just putting another barrier to the professional growth of women in part-time jobs. Positioning part-time work as women’s ‘choice’ has become a bigger face-saving instrument for those who insist that women are responsible for their lower earnings.

But, in actuality, the success of this narrative is more advantageous for employers to keep making more profits while reducing a lot of costs and no one would want to open a pandora box that may cause them to lose profits.

The gender wage gap is not just complex but is also rooted very deep in social and cultural norms. So closing the wage gap between men and women is not something achievable within a few years.

How Long Will it Take to Close the Gender Pay Gap

According to careful estimates, women are not going to reach pay parity with men until at least 2059.

How to Close the Gender Pay Gap

As discussed above, equal pay reform is a highly recommended measure by experts, however, it is not the only measure. More concentrated efforts and consistency is required in the following areas:

The gender pay gap is one of the bitter realities of today’s modern job market, and it is very likely to persist for a long time. However, small individual efforts along with effective reforms can significantly improve the conditions and help close the wage gap between men and women.